Prophetic: Will the West Coast Rumble Lead to the Middle East Roar? 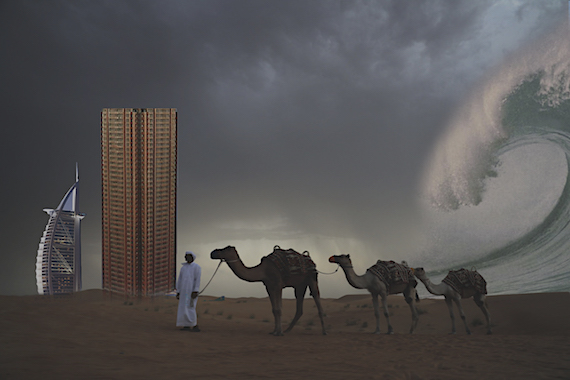 Following the Lord’s repeated instructions, I journeyed to Los Angeles to pray for 21 days. On my seventh day, I awoke with a dream. Sensing the seriousness of the dream, I want to share it with the people of God.

A huge tsunami had crashed the shores of Los Angeles. In the dream, we were in an extremely high rise building, over 60 floors, and the building had been filled with water. People were evacuating with great urgency. Though the majority had evacuated, there were still some waiting on friends and family, or just holding on, who didn’t want to get out.

Once we got out, I saw thousands of people, some floating in the water, many more on land, though all seemed shaken. I saw none dead, but everything, everywhere, was displaced. People were caught in the anxiety of the unknown and fearful anticipation of another wave.

Some were in their office clothes, while others were in their house clothes. It was evident that all lives had been abruptly interrupted. The wave had arrested the city’s attention and though all were standing safe on dry ground, floods were everywhere. All stood overwhelmed by the tsunami, fixed upon what could happen next.

Before I share the full dream, consider the parallel of this Tsunami to a revival: Revival is both exciting and fearful. A revival wave of the Spirit will disrupt every human system and overtake our churches and cities unequivocally. Revival is a like the force of a tsunami; I pray we do not reduce it to a loud noise or mere show of numbers.When revival comes, though exhilarating, the force of God’s glory mandates great reverence. [tweet this]

In the dream, for those who experienced the tsunami, there was great fear, as it displaced all human complacency, lethargy and daily routine with shocking power. If we are not willing for God to wreck us inside out with the force of His Presence, the Church must stop asking for revival. God desires to release a revival tsunami of His Spirit which will break out into every compartment of our life, our hearts, minds and spirits.

Hold on tight: In the dream, I tried to go back into the building to bring some of the people out. I saw some pastors alongside. As I stood next to my family, this time, I had a rope with me. I told my wife, Pastor Tiny, to hold on to the rope and to tie the rope especially onto our youngest son, Moses since he, being three years old, could not hold on tight enough. I was preparing her for what was coming, “because when the wave hits, it’s going to displace everyone who is not holding on!” I couldn’t help but think that when revival hits, our own family and friends may be displaced if they misunderstand, and mock or resist what is coming. We must each hold onto the same rope of hunger, expectation and desire for the next wave of God to visit us, lest we are displaced even within ourselves.

Revival in the Middle East: Though the tall brown high rise building seemed like a location in Los Angeles, California, suddenly in the dream, I looked towards my left, and the scenery changed. I saw a desert wilderness with long sand dunes. In the background, I recognized the famous Burj Khalifa hotel in Dubai.

I was seventeen when I preached there for the first time. Although many high rises were built after, a decade ago, Burj Khalifa was the main architectural attraction to many in the Middle East. I believe that point of reference, a place from a decade ago, means this wave will encompass the prayers of God’s people from over a decade.

In the dream, people were sitting on the sand dunes, enjoying the sunset. All of a sudden, sheikhs in their white robes were pointing towards the sea in wonder. Immediately, I knew the tsunami was going to hit this place next. As I watched, a wave rose. This wave was higher than any natural tsunami waves in our present world. This wave touched the skies. I saw severals Sheikhs, wearing their white garments, fleeing on their camels, trying to ride away as fast as possible. They couldn’t outrun the wave. The wave caught them all.

We’ve been hearing about the revival sparks in California. Some name it West Coast rumble. Could this rumble be the coming soon of the great tsunami of the Spirit? Revive Nations Family, something is about to manifest from the the West of America. Everything we hear now are mere rumblings of this mighty wave that is to come.

This revival will also overtake nations who have resisted the gospel. Irrespective of spiritual strongholds, resistance and years of traditions, God desires to release a single wave of revival that will supernaturally displace. Even politicians and kingdom rulers will be swept into the house of God at His power. May the West Coast rumble become the Middle East roar, as we each prepare for the coming of the Lord! [tweet this]

Without going anymore into interpreting the dream, I want to leave it to those in the Spirit to interpret it as the Spirit calls them to. I believe the Lord is earnestly calling His saints to believe and prepare themselves for the next wave of the Spirit that is going to hit many nations. If the Church will pursue God in this season, like never before, His wave is going to be bigger and will do more than any other previous waves of revival.

Surely the revival that God wants to release over our generation is much nearer than we expect. Are you in? Share this with someone whom you believe will be a part of this next wave of God.

A Happy Heart & an Angry Dog!

5 Steps To Beat A Bad Day

Why Fathers Should Be Fun

Spiritual Warfare Training Part 3: Growing Up and Out of Lawlessness

How to Defeat Dark Thoughts in Your Life

Six Simple Keys to Receive the Gift of Prophecy