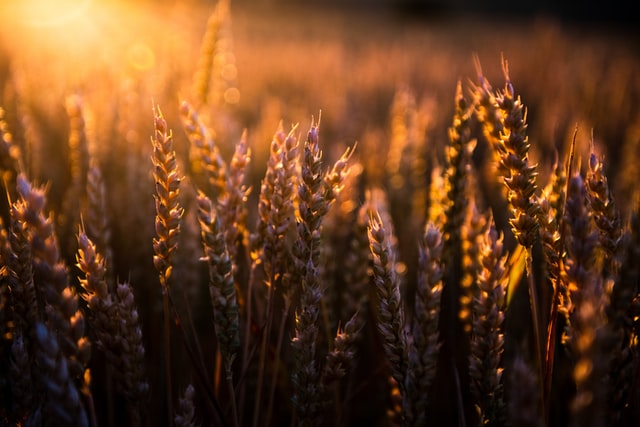 In the Bible, between Malachi and Matthew, lies a single white page. This thin page, though seemingly inconsequential, represents 400 long years of silence. No word of the Lord. No Voice declaring God’s Heart. Not one word by the Spirit. Just silence.

Grandparents passed and children were born. Wars arrived. Armies advanced. Still the people waited. Certain their Messiah would come, Sabbath by Sabbath, the people of Israel recounted the Lord’s goodness, and waited faithfully. Yet, as humanity goes, not everyone could hold their gaze four centuries long. When impatience entered and disappointment grew, the enemy offered a sly alternative: Religion.

Like a young tare, religion can grow so close in shape and form to real wheat, many do not discern the difference between true faith and false religion. Only when tare bread is consumed, does its bitter taste and proceeding dizziness alert a family that tare weeds have replaced the true wheat.

In between the promise of Messiah and Jesus’ arrival, Israel chose religion’s bred.

Faithless, the rulers of the day fought Jesus, preferring the known rather than unknown. Nothing about Jesus would have made sense to the scribes or historians, and they despised Him, judging Him as not from God, when God Himself had arrived.  Despite their intellect, teachers and lawyers, blindly sought wisdom in their sacred scrolls (John 5:39), even as the blind gained sight, the lame walked and people’s hearts were healed. Revival is Jesus, yet the religious missed the Messiah in their midst. Faithless, they clung to their idols of religion and crucified the King.

Yet even among the Chosen ones who pursued Jesus, the revival their soul had encountered had to be very diligently supervised, lest the claws of religion creep in again.

A perfect example of this scenario is the life of one of the most beautiful Jesus Lovers we have the privilege of knowing; her name was Mary.  The one who chose to sit at His Feet, while Martha was distracted in her service to her master, experienced life-changing revival. Shortly after, when death came knocking at her home, Mary lost her dearly beloved brother. Though she hoped that Jesus would rescue him from his sins, that Jesus would raise him, it was there, she plateaued in her understanding of Who Jesus was.  Mary had limited Jesus to a mere teacher of the Scriptures who performed miracles, but not the Messiah Himself. Politely but surely, she expressed her disappointment in Jesus, saying, ““Lord, if you had been here, my brother would not have died!” (Luke 11:32).

Fast forward to right after the resurrection of her brother: you see her perspective has now changed. This time, she doesn’t not come to Jesus as a teacher or a mere prophet. She rushes to His feet, to meet the Messiah that was sent for her. “Mary therefore took a pound of expensive ointment made from pure nard, and anointed the feet of Jesus and wiped his feet with her hair. The house was filled with the fragrance of the perfume” (Luke 12: 3).

In between religion and revival is the death of earthly kings, people who have gained access to the throne of our hearts, where only Christ the eternal King must live. Constantly, in our journey with Christ, we must search our hearts.

2. Be open to more in God. If His mercies are new every morning (Lam. 3:22-23), God is in the realm of the new. God wants us to be introduced to what no eyes have seen, no ears have heard and no hearts have received (1 Cor. 2:9), so carefully observe to see if you are possessive about the old.

3. Monitor your heart for any frustration, when change comes your way. Heaven is constantly growing. Capture with the Only One Who does not need to change (Heb.13:8).

4. Refuse to be judgemental about things you have no understanding for. It is human nature for us to judge that which we do not comprehend. We resist what we do not understand. It is easier to resist than to be humble enough to pursue the grace for that which we have not yet received.

5. Refuse to be critical of other’s peoples walk with Christ. Religion is rooted in the spirit of self-righteousness.  Any time you feel you are better than somebody, you are in danger of the spirit of religion.

7. Beware of outward holiness without inner transformation. Refuse to let your identity be rooted in a lifestyle of Christianity more than Christ Himself.

8. Be alert when you withhold compassion to people that fail in your eyes.Religion deprives humanity of mercy. Sympathy is in the nature of our High priest.  Chances are religion has secretly entered into your heart. Locate every anger and resentment in order to show grace and mercy to people around you.

9. Religion strives to earn God’s favour through works. Religion condemns others for not working as hard as themselves. Monitor your heart to see if you have become the bitter Martha who is jealous of another’s rest and repent.

10. Stay in Faith. Don’t let fear push you into religion. 2 Corinthians 13:5-6 says, “Examine yourself to see whether you are in the faith. Test yourself.”

Finally, brothers, rejoice. Aim for restoration, comfort one another, agree with one another, live in peace; and the God of love and peace will be with you…The grace of the Lord Jesus Christ and the love of God and the fellowship of the Holy Spirit be with you all. (2 Corinthians 13:11, 14)

As we feast on the Lord in this season of Revival, may we align our hearts to His Visitation.  May every seed of religion, every false tare of pretence and practice which presents God and yet does not have knowledge of Him, be removed from our lives, as we feast on the grace and mercy of encountering and knowing and loving our King!

This is Where the Party Ends – Video & Lyrics – Must Watch

← Prev: How to differentiate a Godly Encounter versus Imagination Next: 8 Keys to Excellence →
Blog home page