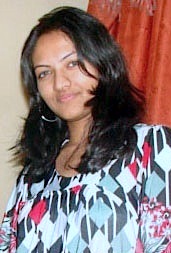 It’s true! The prophets prophesied about it. People around me thought of it. Men of God always advised me about it but I never really thought that it was really going to happen this early. Well, truth be told, it has.

After all the endless presumptions and speculation, God has finally blessed me with a God-fearing woman of God. For some reason, I’ve had to pinch myself to believe that I’m getting married. Many well-wishers thought I should enjoy my bachelorhood for some more time but what matters most is that I pursue God’s will with absolute clarity.

God willing, at 10am on the 7th of April, Tiny Rajan and I will be joined together in holy matrimony in Bangalore by my Senior Pastor, Rev. Dr. M. A. Varughese.

Tiny was born and brought up in Kuwait in an orthodox Christian family. While she was studying for her Bachelor’s degree in Commerce in Bangalore, I had the opportunity to make her acquaintance along with some of her friends during a short break from my studies in Kodaikanal. And in that informal gathering, the Lord touched her through a vision of Jesus sitting by her side which led to her accepting Jesus as her personal Saviour.

Being a minister, who preached to so many to seek the will of God, it came to me as a challenge to be absolutely certain about the perfect will of God over my own life. It led to a season of much prayer and fasting to make sure that we both were in the will of God.

One evening, as I was seeking God in this matter, I received 7 consecutive visions confirming that this was from God and the Lord’s doing. I send a text message to a pastor friend asking for prayers without making mention of the matter. His reply was a vision of great celebration.

I continued seeking God for His perfect will in my life for a few more months. During that season, the Lord taught me to stop being anxious and start trusting God entirely with His will. What followed were many confirmations from beloved servants of God.

Ever since that time, my parents had also been praying and both the families agreed to move forward with this wedding. I would like to thank my little sister, Sarah (Shynu), for all her love and support.

To tell you a little more about Tiny (pronounced as Ti-ni); she is a very shy person with a contagious love for Jesus.

I see the reflection of my prayer life in her. Someone as lost in God as I am and that was and still is the greatest attraction for me. At this moment, I would also thank all her wonderful, kind friends and family for their support and prayers. Tiny also is blessed with an older sister who recently gave birth to a beautiful baby boy named Brian Gins.

Tiny and I would, with the grace of God, start off our first crusade together from the 22nd of April in Kisaran, Indonesia.  I am asking for your double portion of prayers as we serve the Lord together. These meetings are immediately followed by the Annual Conference in Adoor, and then followed by meetings in Trivandrum and Tiruvalla in Kerala.

I am grateful for all your prayers and thank you for all your kind and loving comments. I will God willing after April 7th post our pictures HERE and for more updates meet you on twitter HERE.

← Prev: The Revival Inside YOU! Next: The Most Bitter Man! →
Blog home page