The Gospel of Jesus’ Wife: Is It True? 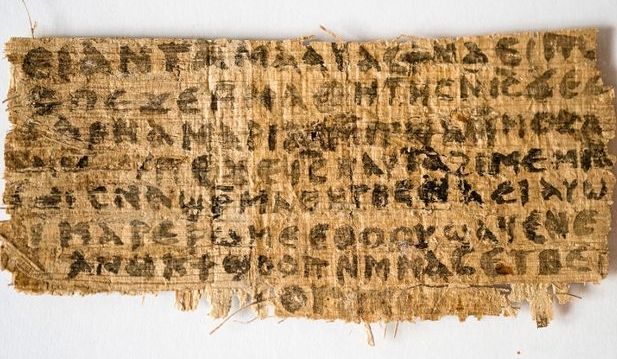 The gospel of Jesus refers to a small fragment, honey-colored piece of papyrus, measuring only four centimeters in height by eight centimeters wide, with writing in Coptic script (an Egyptian language form) on both sides.

It includes the words “Jesus said to them, my wife.” This fragment of the fourth-century papyrus was revealed at a conference in Rome recently. This discovery has already received much attention in the media across the world.

The idea of the marriage of Jesus was notably brought up after the 2003 publication of Dan Brown’s bestseller “The Da Vinci Code.”

Karen King, Hollis Professor of Divinity at Harvard Divinity School in Cambridge, Massachusetts was contacted by an anonymous private collector who contacted King to help translate and analyze it.

Now the itching question that many have is that does this prove that Jesus was married?

No, this fragment does not provide evidence that Jesus was married.

According to the researchers, this papyrus is dated around the second half of the second century. All the other older and most reliable evidence is entirely silent about the marital status of Jesus. This comparatively late date of this papyrus argues against its value as evidence for the life of the historical Jesus.

Its late date also means that the author is not someone who knew Jesus personally. Whereas the New Testament in the Bible was written by those that lived, walked and witnessed the death and resurrection of Jesus.

It was over a century after Jesus’ death before Christians began arguing about Jesus’ marital status to support their different positions of whether it was best to be married or to be celibate. This brought in many more novels and paintings around this topic.

There is no deep dark secret here, just publishers, artists and movie makers trying to make a quick buck with the popularity of Jesus.

Let’s stick to the Bible, the Word of God, that has also been historically proved.

Question: Have you come across such controversial issues regarding Jesus or the Bible itself? How do you deal with them?