Dare To Live It Out Loud! 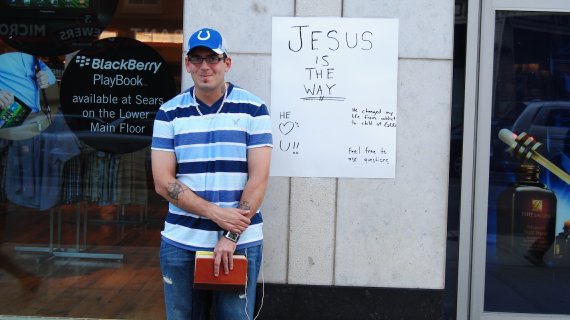 On a bright evening, we were walking around the corner of Dundas Square in Toronto. It was crowded and pedestrians flowed with ease. Suddenly, an old man standing around the corner shouts very abruptly: “Repent!” People passing by were stunned and startled at the unexpected outburst.

I watched an old lady miss falling over as she turned around to tell the man to behave himself. People quickly moved away from him, shaking their heads in disagreement. Another young man walked away refusing to accept a tract that the man was offering.

Moving on from there, a couple of yards away, we saw another young man who stood silently reading his Bible. Beside him was a white board with the words: “Jesus is The Way” and “He loves you”. 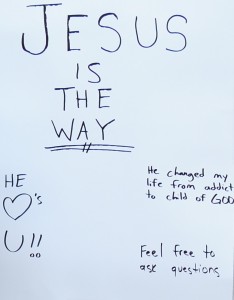 I watched how curiosity got the best of people as they looked at what he had written while they were walking past him. Both men were speaking about the same Jesus, but one had frightened the people away and another drew people to him to know more.

I got to speak this young tattooed man named Steve, who was delivered by Jesus from his drug addiction. A week before, he attended a conference where the Lord changed his life, and he decided that he had to do something for the Lord. Inspired, he decided to start on the street.

We were glad to see him later in one of our conferences where he shared his testimony of being delivered from drugs by God.

Every person you meet is a lesson to be learned. Here are four quick lessons we can learn from the lives of both these individuals:

You will never do anything for God if you keep contemplating. You will have to start somewhere. Start with what you have and wherever you are.

You can be very sure that you cannot please everybody and that the gospel will be offensive to many. Yet try to be wise as well. God will give you some awesome ideas to reach out to the people around you.

3. Let His light shine though you.

Steve is a great testimony to the church that your miracle is not just for you,but for this generation. If you have a testimony, it is not to be hidden. When you surrender whatever you have into the hands of Jesus, the Lord shall multiply it for His glory.

Preach against sin and the religious spirit. Allow me to quote Ps. Mark Driscoll on being biblically faithful and culturally relevant.

Also, to be a good preacher means you cannot only preach against sin. If you do this you will end up with a bunch of nitpicking, self-righteous, religious people. So, you have to preach against both sin and religion. Sinners need to repent of sin and religious people need to repent of their man-made rules, traditions, inanities, holier-than-thou-isms, and calling things sinful that only their conscience and not the Word of God forbids. To be biblically faithful and culturally relevant does not mean we make the gospel relevant. Rather we show the relevance of the gospel. When you call sinners to repent of sin they wrongly think you’re trying to make them religious, and the religious people cheer because they are like the older brother in the story of the Prodigal Son. But once you call the religious folks to repent too, everyone gets confused and the stage is set to preach Jesus!

Here are a few things I want you to think about, and do share with us your thoughts in comments section below:

– Suggest a new creative way to reach your community with Jesus
– How can we be relevant to this generation without losing the essence of the gospel?
– And, do you have a story to share?

Do the New – Have a Revolutionary Church Service!

7 Days of Discovery – Day 5: Discerning the Ways that Our God Speaks to His Children

← Prev: What Would Jesus Do on Internet? Next: Change Your Life in 30 Days! →
Blog home page