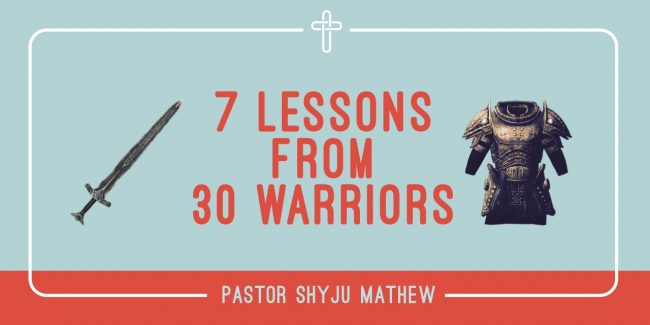 God establishes His kingdom on earth through mighty men and women of faith who are fervent in their love for Christ, capable of carrying out great exploits for God. This was the case for King David, “A man after God’s own heart.” When God raised David to do a mighty work, He surrounded him with 30 of the most powerful, toughest warriors in Israel, who were known for their great victories. They were also committed to King David and to his kingdom [2 Samuel 23:8–39] and known for their bravery.

These Mighty Men teach us 7 valuable lessons on what our relationship ought to be with Jesus, as His followers:

Lesson One: The battles that God allows are intended to increase your stamina so you can win the war

An old Spanish proverb says “Tell me whom you walk with, and I’ll tell you who you are”.

If you walk too long with people who are fearful, your heart will become fearful. Many people have lost their battles to human logic which births fear. Logic says that it’s impossible for one man to win the battle against 800 men. However, the chief warrior of King David, Josheb-basshebeth, killed 800 men in one battle with only a spear!

If you walk with people who are victorious, who live from victory to victory, your heart will begin to shift, and faith will become stronger. It is normal to face battles every day, but it is also normal for the children of God to have victory every single day of their lives!

Victories are God’s way of increasing your stamina to help you win greater battles in your life. God will strengthen you day after day. Your stamina to win will increase!

Lesson Two: You can never have dominion over the things that wear you out

The mighty warrior Elezar killed his enemies with his sword after all his fellow men had fled. He stayed on the battlefield until his arm was exhausted [2 Samuel 23:9–10].

Some people are exhausted even before their battle begins. It is normal for your mind to give in before your arm gives up. It is normal for your heart to fail before your energy is depleted. But God says to His children: Stand your ground and fight this battle because if the enemy can manage to exhaust your mind, you will never have dominion over him.

Lesson Three: God won’t push you beyond your passion

Some people might think it is useless to fight for the small things. But understand this: there is not one blessing God gives that is not worthy of being fiercely defended. David’s warrior, Shammah, guarded the provision of God. He protected a field of lentils even after all his fellow men ran away.

Guard your lentil field now because it has been given to you by God. Don’t give up just because you think it is insignificant. If you give the enemy even an inch of your territory, he will take all of it, including all your blessings.

Take authority and protect your family. Do not let anything linger in the house: sickness, poverty, frustration, anger, lust…  Pray now! Go on a fast now!

Tell the enemy to back off from your family, your homes, your vehicles, your finances, all your kingdoms and domains. They are the blessings given to you by God, and you must protect them and stand your ground in the mighty name of Jesus!

Lesson Four: What made them Elite was their skill enforced by their faith in God

Within the list of mighty men, there were three men who served as a special Elite group: Josheb-basshebeth, Eleazar, and Shammah.

Once, while David was in a stronghold and the garrison of the Philistines was in Bethlehem, he said out loud, “Oh, that someone would give me water to drink from the well of Bethlehem, which is by the gate!”

The Elite immediately broke through the camp of the Philistines and drew water from the well of Bethlehem by the gate. They carried the precious water and brought it to David. Surprisingly, he did not drink it. Instead, he poured it out as an act of worship to the LORD. [2 Samuel 23:15,18]

God equipped the Elite men of David with the skills necessary to bring water from a well located in the enemy’s territory because they had faith. Without faith it is impossible to please God. Many people have skills but do not have faith. By faith, with the grace of God, you will have the skills needed to complete God’s assignments in your life.

Lessons Five: Skills without purpose is why others are millionaires at your expense

Skills without a purpose enslave you to others who will use your skills to their advantage to increase their riches. You will never access wealth without first establishing your purpose.

May the Lord guide you toward your purpose! The skills will follow.

Lesson Six: Purpose and skills without the knowledge of God are towers of Babel

The favor of God is our sole pursuit. Yet success without God leads to death.  As a matter of fact, purpose and skills without the knowledge of God will enslave you to poverty. People who know God shall be strong and do mighty exploits, just like King David’s Elite men.

Benaiah, the leader of David’s bodyguards, was known for going into a pit on a snowy day and killing a lion; he also killed a powerful Egyptian with the man’s own spear [2 Samuel 23:20–21, 23].

How easily do you get defeated in your mind? When was the last time you said “I am done” and felt like quitting? How often do you want to resign or to isolate yourself just because you lost the battle in your mind? Some wars are lost even before they begin because they are lost in the battle of the mind.

Say with me: “I can do all things through Christ who strengthens me” [tweet this][Philippians 4:13]

One man or woman with God against the whole world is still a majority, so don’t get caught standing alone without Him.

God is preparing you for your destiny, battle after battle. [tweet this]

It is time to raise up!

Victory is yours, in Jesus name!

I hope you have been blessed with this message. If so, don’t forget to share this with your friends!