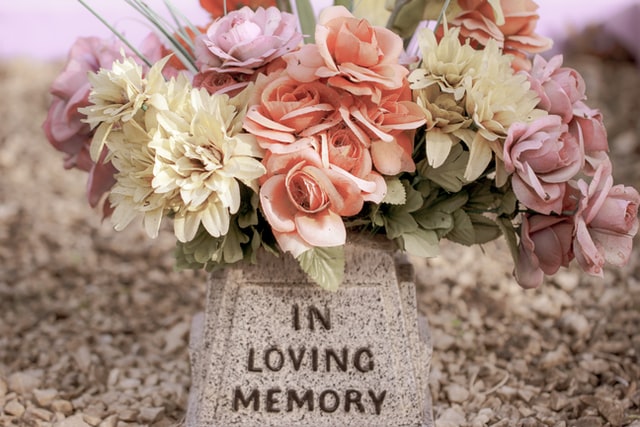 One of the hardest things that I face as a person is to be at a funeral service. There is a pain that comes with good-byes. I struggled with this reality when I saw my grandfather in the coffin few years ago.

I loved my grand father. I remember that, many a times, he stood in my defence from getting whacked at home. He spoilt us with his love. But one day he was gone, just like that. And all I could do was try to breathe as I saw all his seven children, including my mom weep profusely. Out of them all, Mom had the most strength and hope radiating in her face.

It was few months ago when he was visiting us in Bangalore, he was 72 years old. He heard carefully what mom taught him from the Word and he accepted our Lord Jesus as His Saviour and took baptism. She was filled with hope at that thought as she kept confessing, “I’ll see him again. I’ll see him again in heaven!”.

I read another story of a great woman of God – Kathryn Kuhlman as she faced her father’s death during her lifetime. Her papa was the most perfect father a girl ever had, she describes. As a child, she enjoyed sitting on his lap as he sat in his rocking chair. She treasured those moments where she could lay her head on her father’s shoulders.

But one day, her father was killed when he was hit by a car driven by a college student who was home for the holidays. He died instantly in that crash. Kathryn Kuhlman describes the news of her father’s death, a great shock as her heart began to pound madly.

Surrounded by snow, biting wind and tears freezing on her cheeks, she quickly tried to get into the car from the phone booth that she heard the bad news. Thoughts kept racing in her mind arguing whether it was real or was it just a dream. The next few miles driving back home was nothing short of a nightmare. She tried her best to hold on to the car on the glassy road of ice crying as she drove in the darkness of night.

“Papa can’t be dead,” she argued in her thoughts. “It’s just a bad dream. If I ignore it, it will go away.”

But no, it did not go away. At the funeral service, she stood filled with emotions of fear and hate that surged like a volcano in her. The funeral director asked Kathryn if she would like to see her father before they closed the casket. She reached over and gently put her hands on her father in the casket.

As she did, something happened. She realized that her fingers caressed his suit of clothes. She realized not only that black wool coat, but everything that box contained was simply something discarded, loved once, laid aside now. Her father was not there.

Suddenly it occurred to her, her papa wasn’t dead. He was alive. The power of the risen resurrected Christ was revealed to her. She was no longer afraid of death. Slowly her fear and hatred disappeared. She counts that as her first real healing experience.

Numerous times, she had been at the cemetery of her father. But there were no tears, no grief and no heartache. She had realized the words of the Apostle Paul, “Yes, we are of good courage, and we would rather be away from the body and at home with the Lord.” 2 Corinthians 5: 8

I want to encourage you today. If you have ever been through this valley, remember the verse that says in Psalm 23:4, “Even though I walk through the valley of the shadow of death, I will fear no evil, for You are with me; Your rod and Your staff, they comfort me.”

Jesus who said He will never leave you nor forsake is your strength and joy. Now is your opportunity to strengthen and bless those who are weak around you.

Aspire To Be Shut in God | Power Nuggets

← Prev: My Letter to Friends in Corporate Next: Divorce in the Church →
Blog home page