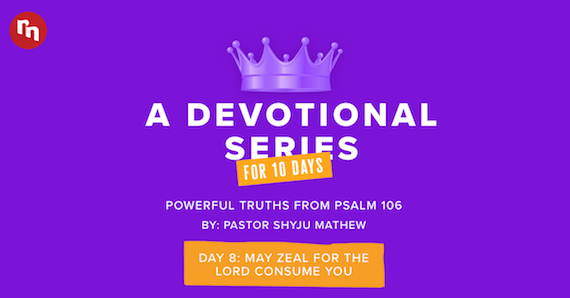 Welcome GTH Family! Today is Day 8 of our Devotional series on Psalm 106 from Prophet Shyju Mathew’s Bible Study with Emmanuel Church in Montreal. Yesterday (Day 7), we learnt how to think about our thinking and honour our God with our thoughts. Today, Prophet Shyju exhorts us to be consumed with zeal for our Lord.

Please share with a friend! May His joy be your strength! Be blessed!

Day 8: MAY ZEAL FOR THE LORD CONSUME YOU

Psalm 106: 28-31 Then our ancestors joined in the worship of Baal at Peor; they even ate sacrifices offered to the dead! They angered the LORD with all these things, so a plague broke out among them. But Phinehas had the courage to intervene, and the plague was stopped. So he has been regarded as a righteous man ever since that time.

In their journey through the desert, the Israelites went out to the world, found the Moabite women, and brought them back into their camps. When these women came, they brought their idols with them. Soon, the Israelites started worshipping other gods in their own camp and God’s anger fell upon them. In God’s wrath, He released a plague and within a brief time, 24,000 people died.

As people were dying, one man brought a woman into the camp and took her into his tent, for intimate relations, even as the wrath of God was being poured out. God said to find the chiefs of all the tribes and put them to death. Phinehas became so angry for the Lord, he speared the man and the woman to the ground, right before God, and because of Phinehas, the plague stopped. As the dust settled, God responded to Phinehas, “Because of what you are doing right now, I am going to bless your generations forever’.

Friend, sin is plenty in our world today. What would happen if there was a Phinehas whom God could use today?

Is there a young woman or man who will put an end to their sin? Obviously, we cannot take a spear, but who will kill their own flesh? Who will fight by the spirit and influence our generation?

Dear saint, be holy because the Lord is holy! The God of Phinehas is our God today!

Thank you for joining us.  We look forward to sharing with you the righteous response to our leaders in tomorrow’s post.

Nothing Impossible with God – Interview with Dr. Sam Abraham