Honour (Part 1): The Kingdom Currency to Open Your Gates 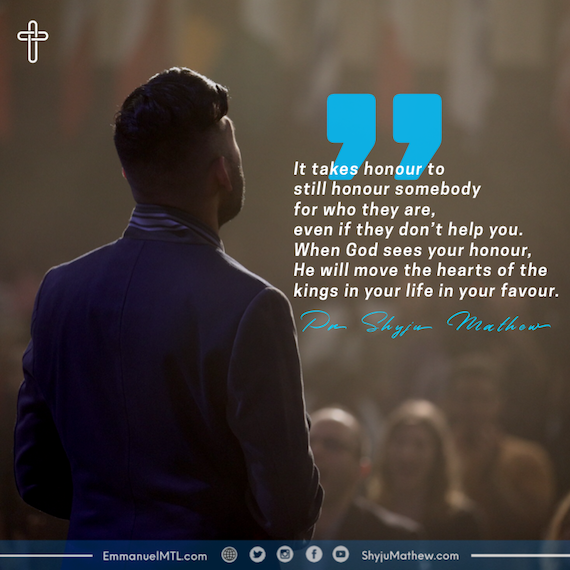 The Ten Commandments teach the foundations of honour for humanity. In this Four Part Series, Pastor Shyju Mathew unpacks the critical components essential to live a life for honour.  Subscribe to have this delivered straight to your mailbox. Share with your friends.  It will change their lives!

Honour speaks loudly in any environment

A beggar on the street knows honour opens a conversation to secure resources. Even the rich man in his Porche must stop for a child crossing the street, regardless of his status or importance. Every environment requires the protocol of honour for a person to proceed.

Honour gives due appreciation that each person deserves

How you honour the person whom God places before you, is how you will enter your next level. People don’t realize there are GATES in life. No matter how educated or rich you are, life has a way of ensuring you can’t go to certain places without going through a certain individual. A security guard may not have your degree, but he is certainly appointed by someone to guard the gate. Without submission to his authority, you will not pass through!

In marriage, wives are appointed to be helpers, but if a husband refuses to honour her, she will become a gate and shut down. We are skilled at understanding everybody else yet we ignore the one whom God has given understanding for us! In the same way, wives may find it easy to honour the policeman or the doctor, but when she arrives home, may despise the king of her house, of her own kingdom, and struggle to honour him. Can you honour the one whom you see every single day? Do you understand the language of honour?

Honour is ordained by God in heaven

The more we understand this language, the more we go forward to places. There are some places that prayer cannot take you, that honour will thrust you into. If we don’t grow in character, prayer will not help us enter the places where God wants to lift us. We may be disqualified from the promotion God wants to give if we do not learn honour in each environment.

Gal 4:1,2 The heir, as long as he is a child, is no different from a slave,thoughhe is the owner of everything, but he is under guardians and managersuntil the date set by his father.

Study the life of Joseph. In his youth, he dishonoured his brothers. When he had his dream, he bragged about it to his brothers and did not submit this revelation to his father. Certainly, Jacob would have urged him to stay quiet. You may be very anointed but understand, you have brothers and sisters around you. You cannot dishonour them and expect to pass under your Father’s gaze.

Joseph flaunted his favoured robe to his brothers, showing it off before brothers already upset. Know when to speak and when to keep quiet. Understand the principle of growing in the dark, of staying hidden until due season, lest the very light that makes your seed grow, causes the seed to shrivel up when prematurely exposed.

Joseph, in discretion, could have remained humble and maintained right relationships with his brothers. Yet Joseph didn’t have maturity. Why did he flaunt his blessings? What did he hope to gain by dishonouring the family whom God had given?

We must honour our family. Do what is right. God commands that we take care of the people who took care of you, that we honour our parents, for then we will be blessed.

Joseph’s brothers removed his robe of favour and threw him in a dry pit. Look into your life and consider: what has brought you to this place, that your own brothers would throw you aside? There are people whom God has given to your life. Don’t fight whom God has appointed. The faster you understand why you are suffering what you are suffering, the quicker you leave that pit of pity. Do you know what is wrong with you? God’s kingdom principle is irreversible: our favour is directly related to recognizing the authority of our masters.

Fair or not, honour!

No matter how anointed you are, you cannot dishonour your own brothers. If you dishonour your brothers, you will lose the favour of your father. Even if they are mean to you, you don’t have the right to be mean in return. When you fight back, you become like them. The enemy’s trick is to reduce you to their standard. Soon, you are no different than them, you lose the favour of God, salt without flavour, thrown into the refuse bin.

Learn the principle of honour in order for God to show you favour. At some point despite all your prayer, you cannot unlocked favour, if you think you are better than your sister or brother.

Do not make Pain your teacher by neglecting honour as the currency of heaven! Consider others more significant than yourself, learn the protocols of honour in your current setting and watch the Lord pour out His blessing upon your life!

Avoid the biggest distraction to your walk with Christ

6 Past Issues to be Uprooted From Your Destiny

Before you give them a title…

5 Keys to See the Good Hand of Our God