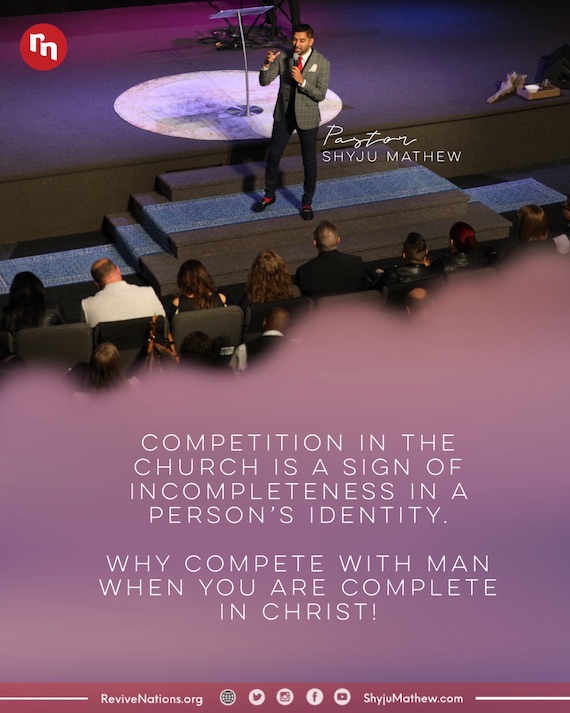 Preparing for the Midnight Hour

Welcome RN Readers to Part 4 of the exciting series, Preparing for the Midnight Hour.  Today, in Part 4 “Living by Royal Standards, Pastor Shyju releases a powerful revelation of our royalty in Christ.  If you haven’t had opportunity to read the previous blogs of this series, here is Part One: Building for Revival , Part Two: Jesus Lovers: Charged with Consistency , and Part Three: Carried by the Spirit of this powerful series! Please enjoy and share with your friends and family!

In this season, would you consider yourself a winner and victorious?  Or have there been losses you can’t understand?

When you begin to understand what God has already done for you and your house, you will begin to function from a higher place, a place not looking for victory, but functioning from a place OF victory.

How do you operate from a place of victory?

Paul exhorts in Ephesians 2: 4-7:
But God, being rich in mercy, because of the great love with which He loved us, even when we were dead in our trespasses, made us alive together with Christ—by grace you have been saved— and raised us up with Him and seated us with Him in the heavenly places in Christ Jesus, so that in the coming ages He might show the immeasurable riches of his grace in kindness toward us in Christ Jesus. (ESV)

In this critical hour, it is essential we operate from the reality of being seated in the heavenly place with Christ and live accordingly.

If you don’t see victory, it is not because you have not been given it.

Then what is our problem?

Perhaps our identity as His royal ones has not been fully understood or embraced.

It is understood that when one marries into royalty, certain expectations are required. In recent scenarios, though one woman may have convinced her husband to leave his royal duties and come away to be part of her world, our Blood-bought royalty came at the cost of our King’s own life.

The Lord Jesus, King of Glory, Who knows the end from the beginning, desires us to live as His spotless Bride. Our King commands us to love and obey His commands.

What happens when we are called royal and live without any further change? Consider this story of a queen who failed to understand the reality of her royalty.

One day, when there was a great celebration, the king called for his wife. He desired to show her off to the people who had come from hundreds of provinces, yet Vashti refused to come at the king’s command.

The king was very angry and asked his princes, “According to the law, what is to be done to Queen Vashti, because she has not performed the command of King Ahasuerus?” (Esther 1:15)

They replied to him, “Not only against the king has Queen Vashti done wrong, but also against all the officials and all the peoples who are in all the provinces of King Ahasuerus. For the queen’s behavior will be made known to all women, causing them to look at their husbands with contempt…and there will be contempt and wrath in plenty.” (Esther 1:16-18).

The king thus decreed Vashti to be removed from his kingdom. Esther took her place only after a very long season of preparation to avoid further protocol breaches.

When a person is elevated to royalty, they cannot possibly live to please their own desires.  In this life, royals represent their king; obedience to the king reflects the level of honour in the kingdom.

Our Lord Jesus said, “Whoever has my commandments and keeps them, he it is who loves me. And he who loves me will be loved by my Father, and I will love him and manifest myself to him.” (John 14:21).

When we love our Lord Jesus, we are also loved by the Father and God the Father will manifest Himself to us!

Friends, in this midnight hour, the Spirit of the Lord desires to manifest Himself to His people, yet God our Father is weighing us, considering our obedience to His commands.

Now is the season to live royal, walking in the dignity and humility of your stature, as the Beloved Bride of Christ.

We are in a season where the Lord is releasing a new dimension of His grace upon the Bride.

The golden realms of God are available to those passionately set apart, a Bride who takes pleasure in delighting in His commands.

In this season, people of God, will you be found pursuing the delight of the Lord in your life?

As you push yourself towards the desire of God over your life, more and more, the Lord Jesus is going to manifest Himself to you. Here, victory becomes certain.

There are different dimensions of God’s love and our obedience determines our access.

In order for the Lord Jesus to manifest Himself to you, you must obey His commandments.

The beginning place is where God so loved the world, He gave His only begotten Son (John 3:16) to die for our sin. That love, the whole world experiences and for those precious ones who believe, salvation is found.

Yet that is just the beginning point for every believer. There is a greater depth of love, where Christ invites you to become His Bride, where He invites you to His inner chamber, to see what no one else sees, to understand in a way others don’t understand, if only you will walk royal in obedience to His commands.

His royal protocols, the Word, require us to subdue our flesh, which only wars against God, to live and see the manifestation of God’s glory, and enjoy the reality as His royal Bride.

Friends, this is a royal lifestyle, not a destination!

As you do, you will begin to see the manifestation of the King of Kings and Lord of Lords.

May our King extend His sceptre, that kingdoms will be discipled as we each master obedience to His royal protocols and live surrendered to our loving King!

10 Steps to Meet God through the Bible

What Ambassadors of Christ Can Learn From This U.S Ambassador