Preparing for the Midnight Hour (Part Three): Carried by the Spirit – What it Takes 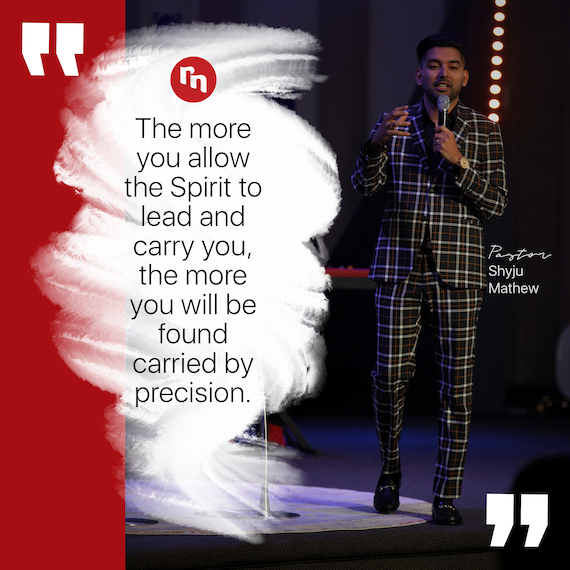 Welcome RN Readers to this exciting new series, Preparing for the Midnight Hour.  Today, in Part Three “Carried by the Spirit”, Pastor Shyju releases a powerful word for the Church. If you haven’t had opportunity, here is Part One, Building for Revival and Part Two, Jesus Lovers: Charged with Consistency of this powerful series! Please enjoy and share with your friends and family!

Revelations 1: 10 “I was in the Spirit on the Lord’s day, and I heard behind me a loud voice like a trumpet”.

John, exiled on a rocky island, punished for refusing to die at the emperor’s decree, rests in his new location, Patmos, a place that went against everything he was created for.

It sounds a bit like our covid-19 quarantine, but John’s isolation lasted years.

Certainly, the enemy meant evil for John, yet it became his place of great advantage. In this place of barrenness, Apostle John cultivated a rich environment of remaining in the Spirit and reaped the Book of Revelations!

In the Old Testament, Ezekiel practised a similar pattern.

Ezekiel 1: 3: “The word of the LORD came to Ezekiel the priest, the son of Buzi, in the land of the Chaldeans by the Chebar canal, and the hand of the LORD was upon him there.”

Ezekiel lived five years into captivity and then, the Hand of the Lord came upon him. Though captives inevitably endure trauma and challenge, Ezekiel remained connected to his Source.

We see further on in Ezekiel 3:17 that God appointed Ezekiel as a watchman. Before his eyes were opened to see visions, even before his ears were opened to hear the voice of God, in his captivity, Ezekiel had trained his flesh to remain before the Lord, despite his surroundings.

People of God, can we come to a place, where, even when it is not convenient, we bring our flesh to submission, to the point that the Hand of the Lord will be attracted to you?

Think about Daniel and his friends, captives just like Ezekiel. There would have been hundreds of young people in exile, yet Daniel and his three friends were set apart.

They had a unique lifestyle. Their choices were different. They moved to a different rhythm.

Daniel, so clear about his times of prayer, even in exile, was careful to starve his carnal nature.

To maintain our connection in the Spirit, we must live a different standard and move to a different rhythm. Daniel, Ezekiel, John, each tuned themselves to the rhythm of God, all in differing times of challenge and oppression.

Peter understood the battle within. He urged the Church, “Abstain from the passions of flesh for they war against our soul.” (1 Peter 2:11)

James bluntly identified the flesh war, saying, “your passions are at war within you.” (James 4:1)

Paul knew focus was essential, writing, “If then, you have been raised with Christ, seek those things that are above, where Christ is, seated at the right Hand of God.” (Col 3:1)

Paul’s life was an object lesson of struggle, yet he wrote two-thirds of the New Testament, remaining under the Hand of the Lord.

Can you choose to keep focused on your Lord, despite present trials before you?

You are different from those who are not awakened in Christ. In Christ, you are like the wind!

Jesus explained, “Somebody that is born of the spirit, they are like the wind. You cannot know where it comes from, where it goes. But you hear it. You hear the sound of it.” (John 3:8)

When carried by the Spirit, we live empowered, yet many are often found being tossed by the waves, focus divided, caught up in fears and worries, instead of resting in His Goodness.

James 1:6 says, “But let him ask in faith, with no doubting, for the one who doubts is like a wave of the sea, that is driven and tossed by the wind.”

Somebody who doubts, lacks faith in God, and they become like a wave tossed by the wind.

The choice is yours. You can either be a spirit led by God, the wind that tosses the waves or the wave that is tossed by the wind, constantly driven by doubt and fear. The first is a warrior led by the Spirit; the second is a child led by the flesh.

In this season, will you focus on the Lord or feed your flesh? Will you be consumed by the Lord or consumed by your body’s demands, your heart’s passions and your mind’s fears?

To hear this message in entirety, head here for:

Revive Nations welcomes you to share this blog with a friend and spread the word that sermons are now available in these seven languages!

God bless you as you pursue His Nearness today!

4 Ways You Can Help Your Leader Today

Trusting Our Children to God: Part One

The Only Survivor on the Island of Vanity